Chelsea’s Eden Hazard picked up an injury during their Champions League quarterfinal match against PSG. It still remains unknown when the Belgium player will be back in action for his club but according to the first-team coach Steve Holland, he could return sooner rather than later.

“Every player is fit at this stage, with the exception of Eden, who should be sooner rather than later. It is still a little bit too early to say for sure. Having a clear week this week is a big advantage.” END_OF_DOCUMENT_TOKEN_TO_BE_REPLACED

Football pundit Glenn Hoddle feels that Chelsea manager Jose Mourinho got his tactics wrong in the Champions League quarter-final match against PSG. Chelsea suffered a 3-1 defeat in the first leg against the French outfit and it has put them on the brink of exit from the competition. Mourinho surprised everyone by naming Andre Schurrle ahead of Fernando Torres as the striker. The Portuguese manager was without Samuel Eto’o, who was ruled out with a hamstring injury, but many expected him to start either with Torres or Demba Ba.

The plan did not make much sense because Schurrle was struggling to get into the match. He was drifting all over the place, which did not help Chelsea to keep the ball. After letting in a goal just three minutes into the first half, Chelsea managed to get back into the match through a penalty from Eden Hazard. However, bad defending from the likes of Cesar Azpilicueta and David Luiz made Chelsea concede two second-half goals, which has put their place in the semifinals in major doubt. Even though they have the second leg yet to come and with an away goal, pundits feel that Chelsea are almost out of the competition.

Hoddle says that Mourinho should have started with Torres rather than Schurrle.

“I don’t think Schurrle playing up front worked. Obviously Mourinho took him off, but I think that was one where he took a risk and it didn’t work. It backfired on him and they had no focus really in the second half. But you’ve got to give credit to Paris Saint-Germain. They probably weren’t happy with the way they were playing after they went 1-0 up and they had a good reaction,” said Hoddle. The second leg will be at Stamford Bridge next week, but PSG want to remain as underdogs. 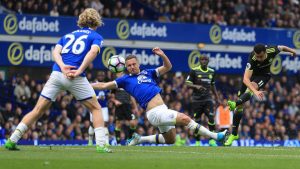